From a contract between Kurt Vonnegut and his pregnant wife, Jane, to whom he had been married for sixteen months. (Kurt Vonnegut, Letters, Delacorte Press, 2014, pp. 1973–1974)

I, Kurt Vonnegut, Jr., that is, do hereby swear that I will be faithful to the commitments hereunder listed:

I. With the agreement that my wife will not nag, heckle, or otherwise disturb me on the subject, I promise to scrub the bathroom and kitchen floors once a week, on a day and hour of my own choosing. Not only that, but I will do a good and thorough job, and by that she means that I will get under the bathtub, behind the toilet, under the sink, under the icebox, into the corners; and I will pick up and put in some other location whatever movable objects happen to be on said floors at the time so as to get under them too, and not just around them. Furthermore, while I am undertaking these tasks I will refrain from indulging in such remarks as ‘Shit’, ‘Goddamn sonofabitch’ and similar vulgarities, as such language is nerve-wracking to have around the house when nothing more drastic is taking place than the facing of Necessity. If I do not live up to this agreement, my wife is to feel free to nag, heckle and otherwise disturb me until I am driven to scrub the floors anyway—no matter how busy I am.

II. I furthermore swear that I will observe the following minor amenities:

a. I will hang up my clothes and put my shoes in the closet when I am not wearing them;

b. I will not track dirt into the house needlessly, by such means as not wiping my feet on the mat outside and wearing my bedroom slippers to take out the garbage;

c. I will throw such things as used-up match folders, empty cigarette packages, the piece of cardboard that comes in shirt collars, etc., into a wastebasket instead of leaving them around on chairs or the floor;

d. After shaving I will put my shaving equipment back in the medicine closet;

e. In case I should be the direct cause of a ring around the bathtub after taking a bath, I will, with the aid of Swift’s Cleanser and a brush, not my washcloth, remove said ring;

g. When smoking I will make every effort to keep the ashtray I am using at the time upon a surface that does not slant, sag, slope, dip, wrinkle or give way upon the slightest provocation; such surfaces may be understood to include stacks of books precariously mounted on the edge of a chair, the arms of the chair that has arms, and my own knees;

h. I will not put out cigarettes upon the sides of, or throw ashes into, either the red leather wastebasket or the stamp wastebasket that my loving wife made me for Christmas, 1945, as such practice noticeably impairs the beauty and ultimate practicability of said wastebaskets;

i. In the event that my wife makes a request of me, and that request cannot be regarded as other than reasonable and wholly within the province of a man’s work (when his wife is pregnant, that is), I will comply with said request within three days after my wife has presented it. It is understood that my wife will make no reference to the subject, other than saying thank you, of course, during these three days; if, however, I fail to comply with said request after a more substantial length of time has elapsed, my wife shall be completely justified in nagging, heckling or otherwise disturbing me until I am driven to do that which I should have done;

j. An exception to the above three-day time limit is the taking out of the garbage, which, as any fool knows, had better not wait that long; I will take out the garbage within three hours after the need for disposal has been pointed out to me by my wife. It would be nice, however, if, upon observing the need for disposal with my own two eyes, I should perform this particular task upon my own initiative and thus not make it necessary for my wife to bring up a subject that is moderately distasteful to her;

k. It is understood that, should I find these commitments in any way unreasonable or too binding upon my freedom, I will take steps to amend them by counterproposals, constitutionally presented and politely discussed, instead of unlawfully terminating my obligations with a simple burst of obscenity, or something like that, and the subsequent persistent neglect of said obligations.

The terms of this contract are understood to be binding up until that time after the arrival of our child (to be specified by the doctor) when my wife will once again be in full possession of all her faculties and able to undertake more arduous pursuits than are now advisable. 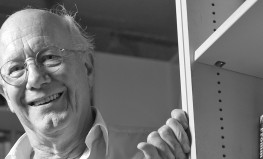 Christopher Ricks I’ve been to museums that are full of plates, but I’ve never seen a plate that would make any difference to my life.