I even prefer the drawings to be in the same room with me, whatever room I happen to be in.

I even prefer the drawings to be in the same room with me, whatever room I happen to be in.

Maybe it’s my natural wariness getting in touch with the unknown inside me. Maybe art is the ability to take what’s inside you, articulate it and make it visible… But, generally speaking, I don’t want to burden myself with the artist’s role.
Then, what kind of role do you want? A draughtsman’s, right?
Yeah, a draughtsman. To me, a draughtsman… Not every drawing is a work of art… in some sense I find that liberating. But you can think of it in a different way too. In a drawing, you make an entrance and an exit, a kind of door. It’s a door to what you might call childhood. It’s a way you manage to wonder, to get excited. When I was in art school, I really didn’t like doing all that summer work—all those watercolours—it was boring. But I’d find some pond, and then I could spend hours just poking tadpoles and leeches with a twig—these creatures are concealed in the water; they swim down deep and you can’t get at them. You know, there’s a kind of threat in that indifference nature has for man.

It seems to me like your drawings make it possible to look at something that doesn’t have a name or something that has a name but no form. The form you offer is these characters. Some are placed in landscapes, like that little girl in the desert.
You know, one of my intentions, one of the things I thought would be nice was, if when I came home, all alone, to my decrepit flat after some night out drinking, I had a picture of some people who I could hang out with—have a nightcap with, sit and have a couple of cigarettes and reminisce with, remember the day’s events. In this sense, I draw them for myself. Co-exist­ing with them is very important to me. I even prefer the drawings to be in the same room with me, whatever room I happen to be in.

Are your characters afraid of death?
You know what I suspect? That they know more than I do. The little girls have figured something out…
The ones with the tight pigtails? By the way, why do you braid their pigtails so tight?
Not all of them!
But they’re all dirty, with shiny eyes and the beginnings of wrinkles.
If the girl’s dirty, it means she likes to investigate, she’s curious—she’s looking for some bugs in the basement or mice, and that’s already interesting, isn’t it? If she were a neat little girl, in a nice dress, skipping rope, eating pastries, then she would be…
She’d be from that movie, The Shining, that pair of twins.
No, they were dirty too, just with blood. As a matter of fact, little girls seem more mysterious to me than boys.

So, what would you call them: creatures or people?
Hey, enough already—they aren’t people and they aren’t creatures, these are drawings! You know, a person’s face is a sort of encounter, the most intense kind there is. You can have an encounter with an animal, but it’ll only be intense if the animal wants to go for your jugular. And that’ll only take a moment. Whereas faces… It’s a prolonged encounter… like us. We’re looking into each other’s faces and capturing an expression, a grimace, a trait… At the same time, we’re reading into it, so we’re experiencing what’s important to us. A face lets us experience this the most, more so than a landscape or an abstract painting. 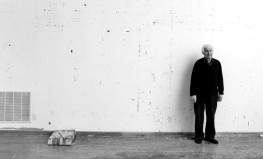 Ilya Kabakov I was a little child when I realized that living in this world is impossible.