The day after a famous politician is assassinated life seems as though it will never be the same again. But this feeling always fades. It is much later that we realize that life has indeed changed. It took me a year after the murder of Boris Nemtsov to figure this out.
The Greeks called a citizen who was not involved in the life of polis an idiotes. Thus, being separate is akin to being mentally ill. Still, I had to live through this illness to realize this. In recent years, we have migrated to the world where nothing changes. Elections change nothing, Chechen wars and wars on terror change nothing, political assassinations change nothing, and the culprit is irreparably uncertain: them or not them?
These pronouns reek of Brezhnevian stagnation, when the whole country suffered the neurosis of political apathy. The depoliticization I was trying to construct by equipping the Kremlin machine with the gears of ‘elegant schemes’ was reached, and yet I missed the moment of ‘our victory.’ The spirit of depoliticization renders the milestones insignificant and irrelevant for the future. Depoliticization changes the texture of reality, not just the way we look at it. The eye is prowling for imaginary subjects, and the worst part is that it finds them.
‘Nothing ever changes in Russia’ is what we write and say every day. But these are the words of a mentally ill person: idiotes needs arguments for being aloof. ‘They do whatever they want, there it happened again’ is what we were saying last year when they moved up the date of the Parliamentary elections and started an intervention in Syria. Those were the words of idiotes whose world is out of joint in more senses than one. It was us who did not notice what they failed to achieve in Ukraine. It is us who do not see the absurdity of rescheduling the elections from December to September (the reasoning being worse than the act itself: ‘the Constitution stipulates the year but does not prohibit insignificantly moving the election day in either direction’).

We started the previous year with the rouble losing half of its value against the dollar and the perspective of a return to war in Donbass; we finished it by launching rocket strikes from the Caspian Sea on Syrian cities. At the beginning of the year, we did not know if we were to have a war with NATO in Ukraine; in the end, we assaulted a legion of subjects of international law: from Turkey and Syrian Turkmens to the Egyptian tourism industry. These actions have not been duly processed in political debates. A surge of political facts outstripped the capacity of the apolitical brain. With the assassination of Nemtsov, the Minsk II Protocol, or the new ambitions of Kadyrov, the mass of politicization has been growing. Yet no one, including liberal media and social networks, construed these events from a political perspective.
The military escalation of the Russian government, especially in Syria, is a side effect of our apolitical apathy rather than an attempt to divert our attention. This rampant absurdity is the result of a lack of restraining forces. This depoliticized world is plainer than that of Thomas Friedman. It has no idea of its depth unless it is falling. It does not allow anyone to stand up for his interests and goals, let alone offer an alternative. The dissenters are still there, but they are silent.
An inhibited public is a nightmare for the people on stage. The authorities grope for any reaction and rush towards the applause wherever they hear it. They try to make it go on and on or fake it when the public is tired of clapping. We are witnessing a bizarre situation: a weak government has set off in search of adventures, leaving behind the uncompleted construction of the Russian state. It finds escalation after escalation where it did not even expect to find a local population: ‘some Turkmens.’
The passions in the world boil just as vehemently but there is no steam valve, and everyone has to lie. And yet even this is not as bad as the atrophy of life devoid of politics. A depoliticized world is a twilight zone where honest people look for those who stole the light, overestimating the skills of the thieves. Over the past year, I have seen a number of people who mistake the general history for the personal one; even those who despise lies are not immune. For a year people have being guessing when our society lost its civil sovereignty. Lenin, Bolsheviks, Stalin, Brezhnev, Lucifer-Putin were named the daemons of loss. The loss of what? Is this loss real or is it something that is more convenient to look for under the luciferous Putin?
A primary deceit is the Russian idea of history. It is a presumption, the only question left for dispute being when and who is guilty (but not ‘where is the loot,’ for no one needs it). I have also been named as a disguise of the deceit, because everyone knows that ‘Pavlovsky made us elect Putin.’ I could lament: if the verdict and the sentence are already in, it is too late for me to repent. But the thought turns to a different subject, to that irredeemable state where everything yet to be found is considered already known—and then why look for the way out? In the Russian labyrinth of depoliticization, nothing is tested until the very day of apocalypse. And while it is still far away, you can make yourself comfortable according to your demands and income level. 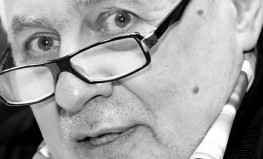 Gleb Pavlovsky Man is a kind of play with time, so I decided to use it this way—by including history in my biography.

Mikhail Gefter I’ll start with the statement: murder is indicated to man.